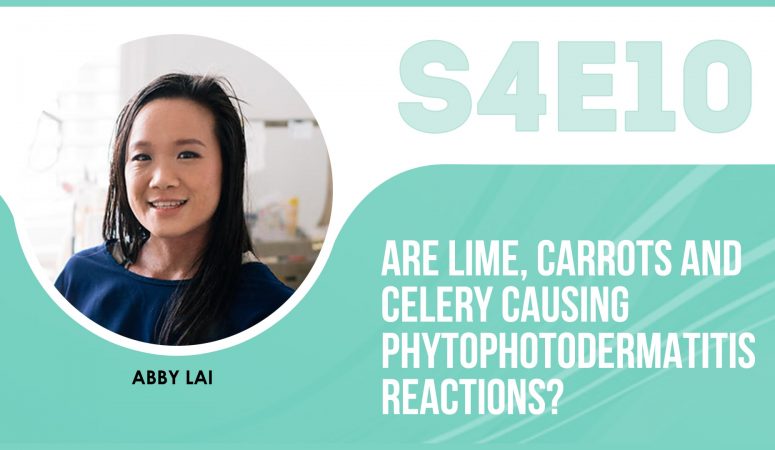 Phytophotodermatitis is a dermatitis that’s presented as an irregularly shaped rash caused after the skin is exposed to photosensitizing compounds in certain plants and then exposed to sunlight, (especially ultraviolet A rays, 320-400 nm).1 Although simple photoallergic reactions may occur, phototoxicity is more common.

When exposed to UVA radiation, psoralens cause photochemical reactions in the skin which damage cell membranes, resulting in cell death, edema, blistering, and injury to the epidermis

They can appear as irregularly shaped rash, and the patches can also appear in the form of drips and streak marks.

It can also appear as a ‘streak mark,’ which can look like juice dripping downward, handprints from contact, or streaks from brushing against plants.

It is important for a physician to be aware of phytophotodermatitis because it may often be misdiagnosed as other skin conditions including fungal infection, cellulitis, allergic contact dermatitis, Jellyfish stings, poison ivy, hives, herpes, shingles, burns, and even child abuse.

Good Morning America did a segment where they found people who got phytophotodermatitis after making margarita’s out of limes and then touched their necks. Some had also gotten it around their mouth after biting a lime.

One research paper even showed a 24-year-old nurse who had a rash on her hands and wrists. The rash was irregularly shaped. They found out that prior to the development of the lesions the patient had baked a key lime pie from scratch. Part of the preparation included squeezing fresh limes by hand; afterwards, she walked outside on a bright, sunny day. Several hours later, her skin symptoms began.

The following are plants and fruits commonly associated with phytophotodermatitis:

The active substance within the furanocoumarins is psoralen,2,4 reacts with UVA light to cause an intense cutaneous reaction.

Phytophotodermatitis does not involve any immune mechanism but must be differentiated from an allergic response.7

The acute dermatitis is self-limited and resolves over a period of days to weeks, but the ensuing hyperpigmentation, caused by psoralen-stimulated melanin hyperproduction, can last weeks to months.1,2

The rash is also dependent on:

Usually, the rash is nonpruritic (not itchy). Pruritus should prompt consideration of other diagnoses.3

Not everyone will experience phytophotodermatitis after exposure to furocoumarins. There can be a greater risk if you have a history of contact dermatitis with other substances, such as metals and cleaning agents.

Other risk factors for this skin reaction may include:

Phytophotodermatitis is also more prevalent in the spring and summer.

Berloque dermatitis is caused by a phototoxic reaction that occurs when fragrance products or aromatherapy oils contain bergapten (5-methoxypsoralens), which is a furocoumarin known to be the a photoactive component of bergamot oil, which comes from the bergamot lime (Citrus bergamia).

It can also be found in bergamot oil. When it’s applied to the skin, reactions can occur followed by exposure to sunlight.1

Avoidance of the offending compound is the primary goal of treatment.

Symptoms include streak marks where you apply fragrance or aromatherapy oil — most often around the neck and wrists.

Because bergamot oil is known to cause this phototoxic reaction, its use has been restricted in the United States.3 However, it is still found in perfumed products and aromatherapy oils.4 One case of berloque dermatitis in a 9-year-old girl was initially reported as child abuse.

The patient recalled that the eruption began in the evening after spending a day at the beach. On specific questioning, the patient revealed that she had applied perfume to the involved areas in the morning before going to the beach. The patient and her mother reported that erythema and blistering developed within the next 48 hours.

Her primary care physician suspected the lesions were the result of child abuse and reported the family to child protective services.

From the history of perfume application followed by sun exposure, together with the dermatologic findings, berloque dermatitis was diagnosed. The child was treated with topical corticosteroids and instructed on sun avoidance.

The girl’s cologne was brought to the clinic. It was marketed as “Baby Magic Colonia,” and was from their home country of Ecuador. The fragrance ingredients were not listed, as is typical for fragrance products.

On follow-up 2 weeks later, the erythema of the right lower face had resolved and only postinflammatory hyperpigmentation remained.

Treatment is sometimes pursued; however, there is limited evidence on efficacy.

Treatment of phytophotodermatitis depends on its extent of involvement. In mild cases, conservative management works. This includes:

In severe cases or in those involving more than 30% of total body surface area, admission to a burn unit is recommended for local wound care.

In some cases, physicians might choose to prescribe topical steroids1,3 or antihistamines,3 or advise the use of cold compresses1 for relief of pain or itching.

Evidence for these treatments is based on expert opinion. While the rash might be aesthetically disturbing to patients, reassurance is often all that is needed.2

Patients can be counseled on prevention. If an exposure can be identified early, the chemical stimulus can be cleansed from the skin with water.

Psoralen must be absorbed into the skin before activation by UVA light, a process that can take anywhere between 30 and 120 minutes.2 This knowledge might be useful for patients with occupational or travel-related exposures.

Not all sunscreens are helpful in preventing the rash, as some sunscreens only protect against UVB light.9

One thing to note is that hyperpigmentation often develops 1 to 2 weeks after epithelialization and may last for many months before fading. 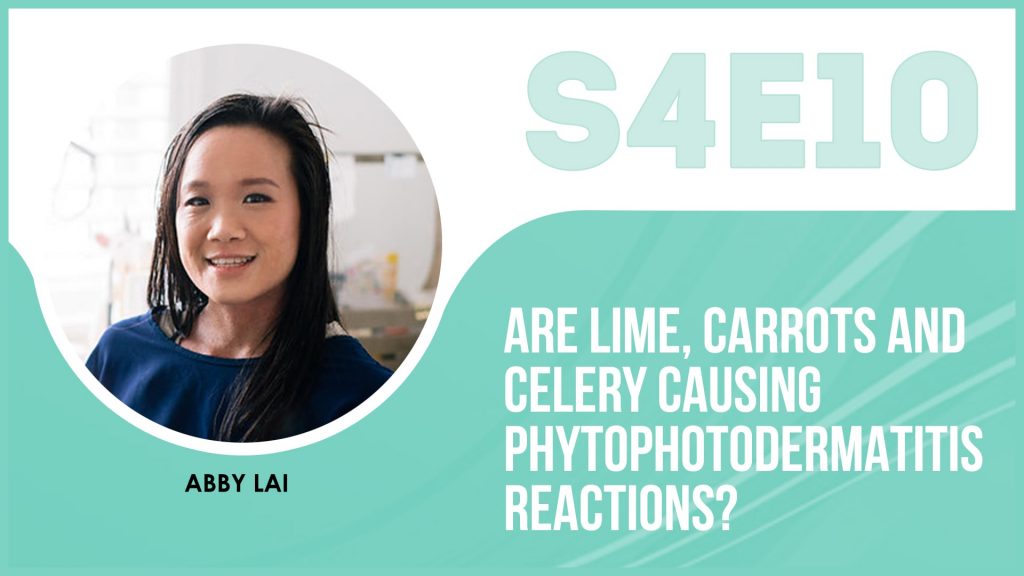 You can also listen or subscribe to the podcast on iTunes, Spotify, or other podcast players.

If you want to hear everything she shared, head on over to iTunes, Spotify, or Google Play to listen to it.

If you want to hear everything she shared, head on over to iTunes, Spotify, or Google Play to listen to it.

Click here for more eczema resources or visit my list of recommended products for eczema! You can also find products to help your skin below:

Abby is a Registered Holistic Nutritionist who helps clients achieve optimal health. She is passionate about seeing people use health and nutrition to transform lives. She hopes that her experiences and knowledge can help educate others on natural remedies that will help eczema. Follow her on Twitter, Facebook, Pinterest, Instagram, or YouTube for more updates!

Disclaimer: All the information found on this website should be used for informational purposes only and is not intended to replace proper medical advice. Always consult a qualified health care provider before embarking on a health or supplement plan.

Get free weekly updates in your inbox

Sign up to get a free eBook, eczema-related tips, and natural remedies to improve your eczema today. 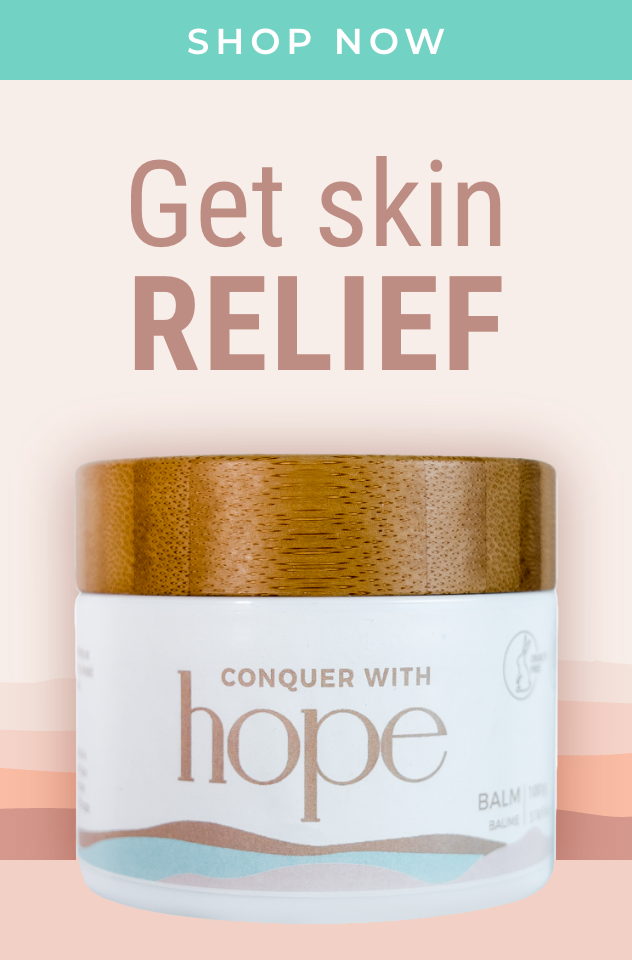 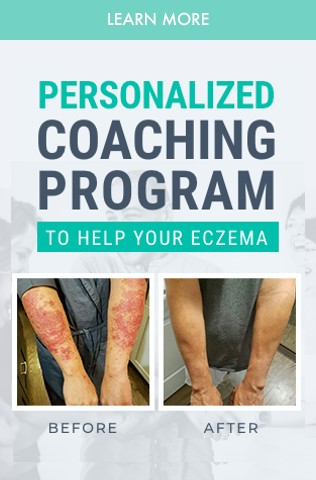 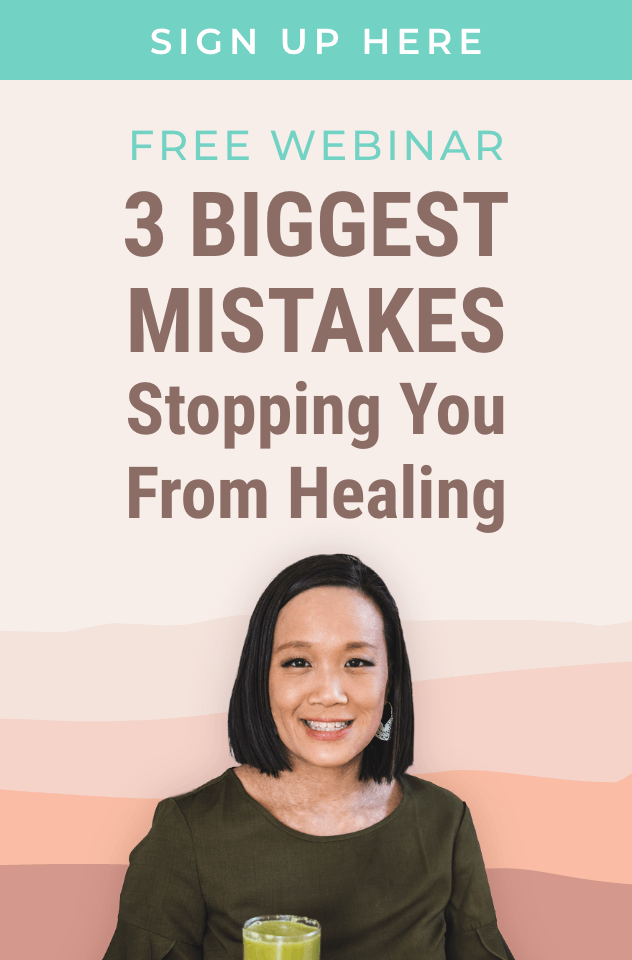